C/1906 B1 Brooks
more info
Comet C/1906 B1 was discovered on 27 January 1906 by William Robert Brooks (Smith Observatory at Hobart College, Geneva, New York, USA). At the moment of discovery the comets was over a month after perihelion passage, and was last seen on 25 April 1906. In 2005, Gary W. Kronk identified a prediscovery observation of this comet performed by E.E. Barnard (Yerkes Observatory, Wisconsin, USA) on 23 July 1905. [Kronk, Cometography: Volume 3].
This comet made its closest approach to the Earth on 11 February 1906 (0.911 au), that is about two weeks after its discovery.
Solutions given here are based on data spanning over 0.756 yr in a range of heliocentric distances from 2.496 au through perihelion (1.297 au) to 2.185 au.
Pure gravitational orbit determined from all available positional measurements (267 observations) give hyperbolic original barycentric orbit (2a-class orbit); also original orbit given in Minor Planet Center is hyperbolic (186 obs. used, the same arc of data; 1B-class orbit, see MPC).
It was possible to obtain the non-gravitational orbit for C/1906 B1 (preferred orbit); however, only radial non-gravitational parameter was determined. This NG solution give elliptical original barycentric orbit (see NG orbit).
Comet suffers rather small planetary perturbations during its passage through the planetary system; however, they lead to escape the comet from the planetary zone on a hyperbolic orbit (see future barycentric orbit given for NG solution).
This comet was in the original sample of 19 comets used by Oort for his hypothesis on LPCs; however, according to presented here statistics for previous perihelion passage this comet most probably is dynamically old.
More details in Królikowska et al. 2014. 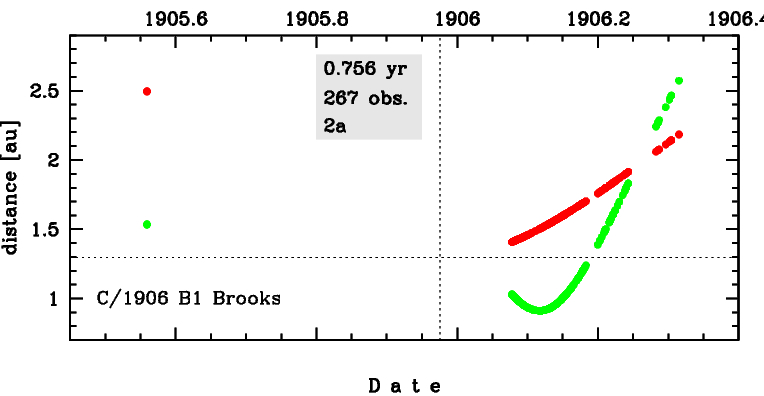