This Catalogue is dedicated to the memory of Professor Grzegorz Sitarski (1932–2015), without whom, it would never have existed

This is the first catalogue showing orbital evolution of long-period comets during the three consecutive perihelion passages: previous — observed — next,
and covering their dynamical evolution over a period of typically 1–10 million years. This is implemented in the form of five snapshots:

The positions of these snapshots on a cometary trajectory are shown on the example of C/2012 T7 LINEAR orbit in the figure given below. 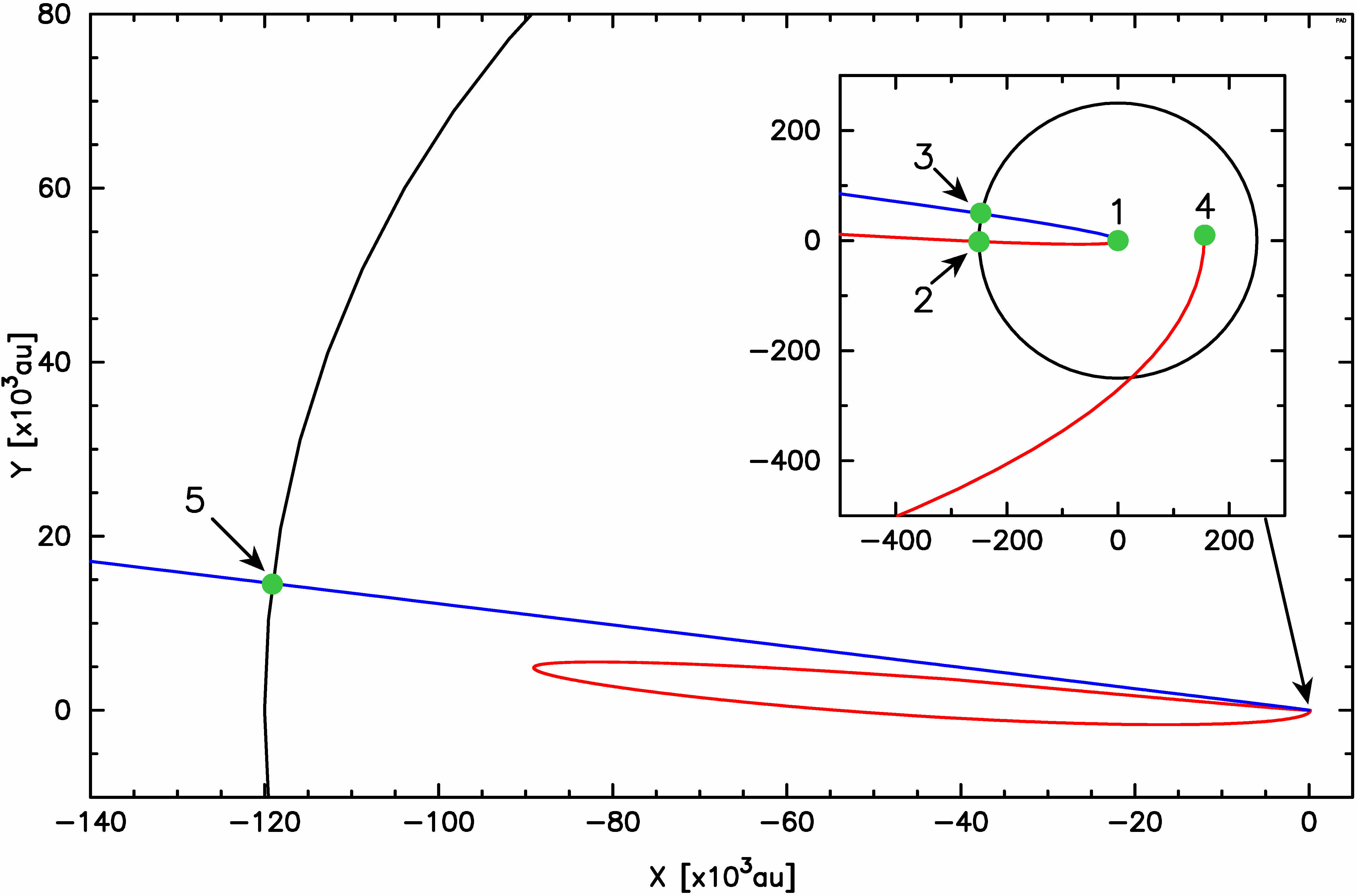 An example of a comet dynamical evolution described in CODE. This particular plot describes orbital changes of C/2002 T7 projected on its original orbit plane. Red line depicts the past motion of this comet while the blue one depicts its future evolution. Marked are five epochs (snapshots) when orbital elements are recorded: 1 — osculating heliocentric orbit near the center of the observational interval (typically near the perihelion), 2 — original barycentric orbit recorded in past at 250 au from the Sun, 3 — future barycentric orbit recorded in future at 250 au from the Sun, 4 — previous orbit, recorded at the previous perihelion, 5 — next orbit, in this case recorded at the escape border taken at 120,000 au from the Sun, but for many other comets recorded in the next perihelion.

The second novelty is that for many of presented comets, the CODE Catalogue includes different orbital solutions, based on alternative force models or various subsets of positional data. The preferred orbit is always clearly indicated. Moreover, for about 100 of these long-period comets, their non-gravitational orbits are given as well as orbits obtained while neglecting the existence of non-gravitational acceleration, given for comparison.

At the moment, the CODE catalogue offers orbital solutions for almost the complete sample of comets discovered in the period 1885–2017 with an original semimajor axis greater than 10,000 au for a purely gravitational orbit. We call these objects Oort spike comets in the CODE Catalogue. Less than about twenty Oort spike comets with q<3.1 au discovered in a period 2013–2017 are missing; however, they will be added in the near future.

All osculating orbits of comets in CODE catalogue were determined from the positional data using the same method of orbit determination and a model of the solar system as in our previous papers; see Królikowska & Dybczyński (2010), Królikowska (2014), Królikowska (2020) , including the procedure of data selection and weighting, and details about the methodology used for the determination of non-gravitational orbits.

The homogeneity of methods and models used for CODE catalogue is essential for statistical considerations of comet orbits, particularly in the investigations of the shape of the Oort spike maximum (i.e. the original 1/a-distribution).

For the past and future dynamical evolution of a given comet a swarm of 5001 virtual comets (hereafter VCs), including the nominal orbit were constructed according to the Monte Carlo method proposed by Sitarski (1998) . This approach allowed us to determine the uncertainties of all orbital elements at any epoch covered by a numerical integration to the previous perihelion passage as well as to the subsequent perihelion passage.

Starting from an osculating epoch, the dynamical calculations of each swarm of VCs were performed backwards and forwards in time until each VC reached 250 au from the Sun, that is, a distance where planetary perturbations are already negligible. At this stage we switch from a heliocentric to a barycentric reference frame. These swarms of orbits are called original (snapshot 2) and future (snapshot 3) and are available for download as described below.

Previous and next cometary orbits; snapshots 4 & 5

Original and future swarms of LPCs' orbits were followed numerically taking into account Galactic and stellar perturbations. We use models and methods described in detail in Dybczyński and Berski (2015) . In short: we numerically integrate each virtual comet with the Sun and several hundreds of nearby stars under the overall Galactic potential.

Our list of potential stellar perturbers includes at present 645 stars or stellar systems that can appear closer than 4 pc from the Sun during the studied time intervals (typically 10 Myr to the past or to the future). The detailed description of this list and of the publicly available database of stellar perturbers can be found in Wysoczańska, Dybczyński and Polińska (2020) .

Generally, we stop our calculation at the previous or next perihelion. However, for hyperbolic or very elongated elliptic orbits in a swarm of VCs, we apply the so-called escape limit of 120,000 au. The final orbits obtained from these calculations, we call previous (snapshot 4) and next (snapshot 5).

There are two main views of the CODE database interface, called  Browse  and  Search.

The first one allows the user to browse across all orbital solutions included in the database, including osculating, original, future, previous and next orbits described as five snapshots above.

The  Search  screen allows for searching among all the data narrowing almost all parameter intervals. Below, we describe in short both these functionalities.

An anonymous user have an access to a slightly narrowed subset of data, for example objects currently under additional study might be partially embargoed. Logged users can access some additional objects/orbits. Logging credentials can be obtained by e-mail from the authors on the circumstantiated request, for example in case of a research cooperation on particular objects. 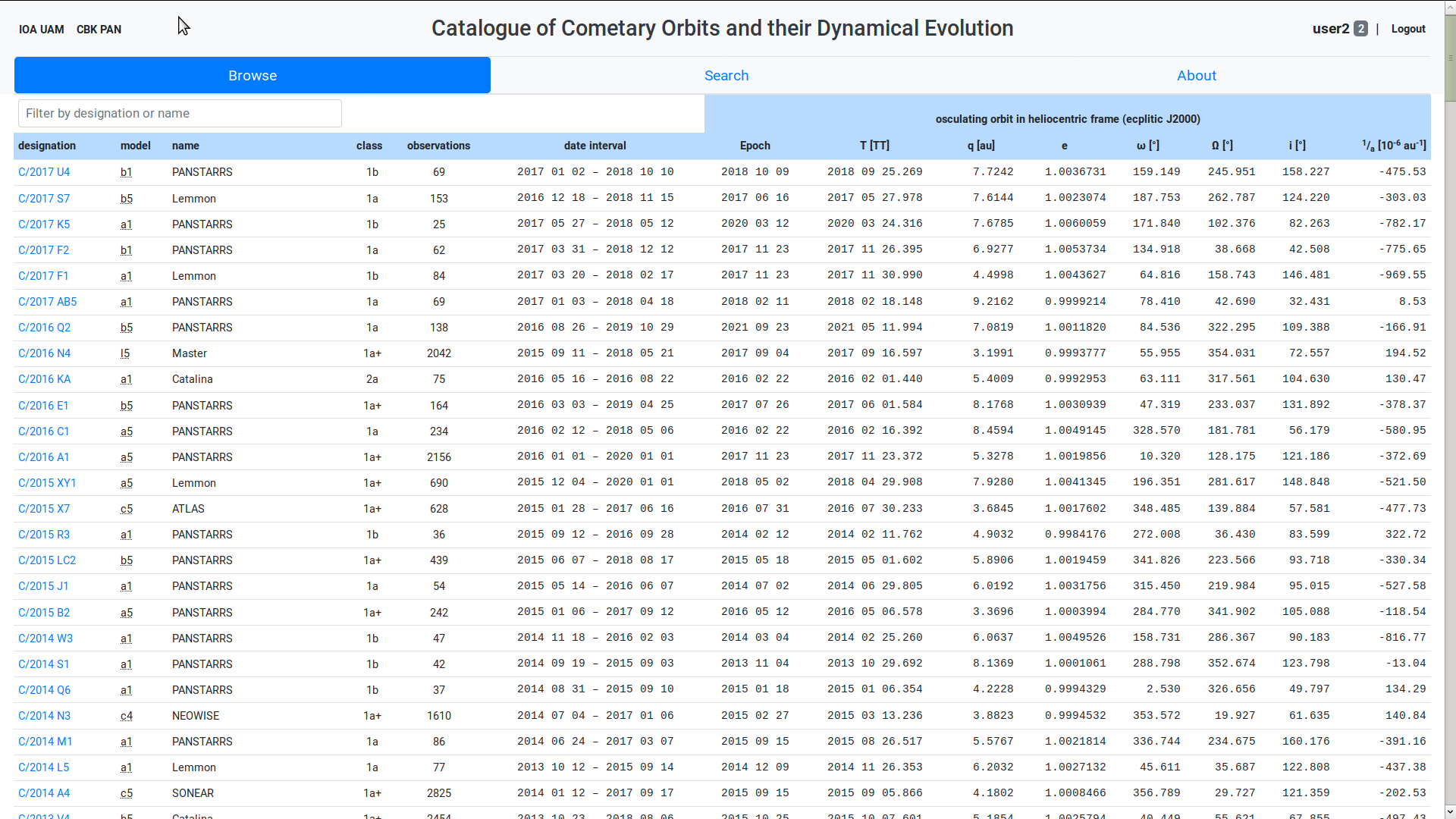 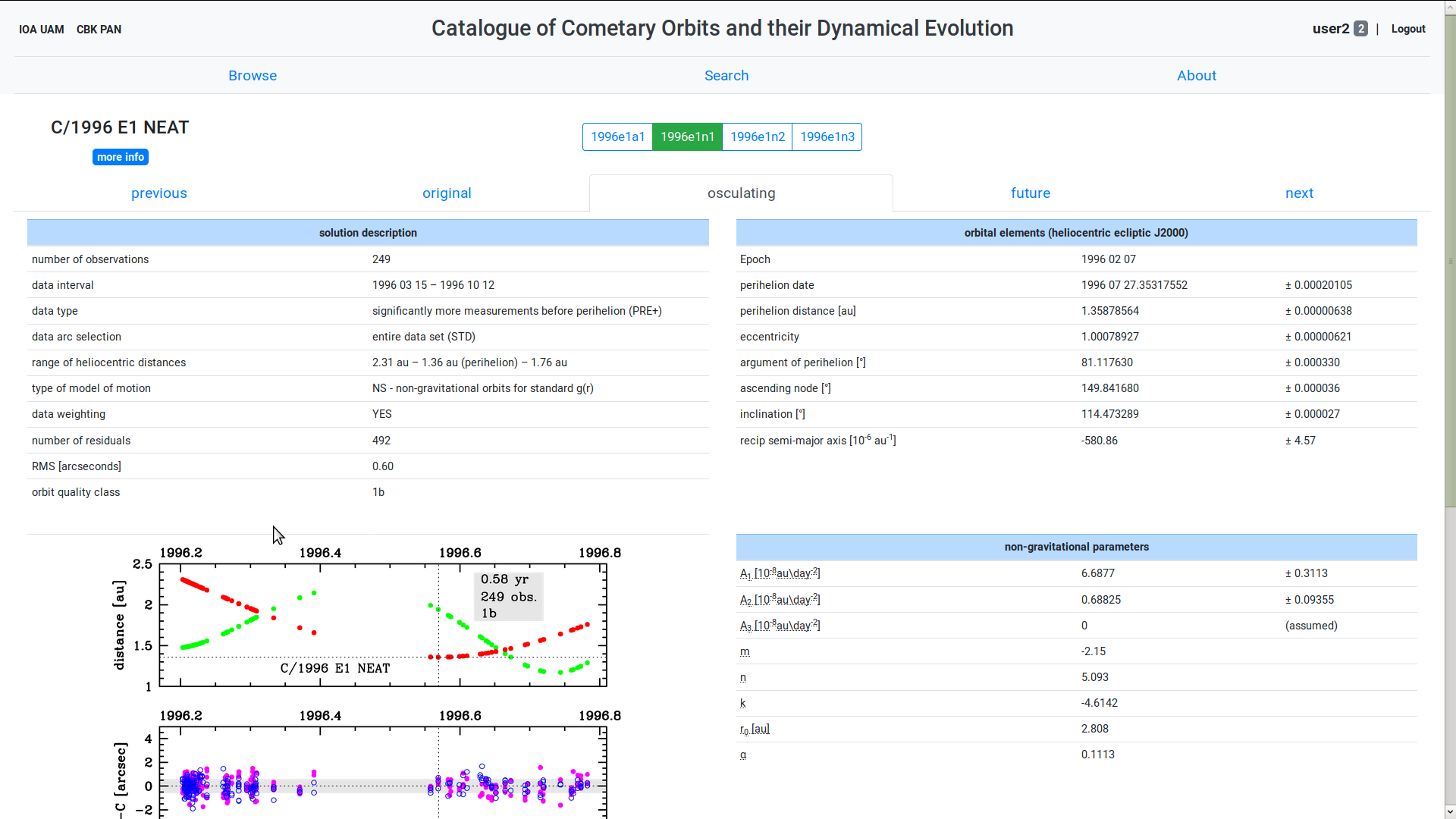 Browse  is a default view of the CODE database (see left picture just above), available immediately after opening its internet main page in a user browser. It shows all comets with their designations, names, observational material characteristics and osculating orbit elements (presented in a lowered precision). In this view, we present only one, preferred orbit for each comet. The user can narrow the visible list of comets by using a filtering box (at the left above the table). Any string entered in this box will be automatically matched against a comet designation and/or name. Moreover, clicking on any column headings will sort all the table according to the pointed parameter.

Clicking on the comet designation presented in the leftmost column allows to enter a  'comet presentation screen' (see right picture above). In its upper part a comet description is available and a clickable list of orbital solutions (the preferred one is presented by default and named in green).

For each orbital solution five cards are available, describing in full detail and precision five orbital snapshots: osculating, original, future, previous, and next. In most cases an additional graphics are also presented.

As was mentioned, we constructed a swarm of 5001 virtual comets, including the nominal osculating orbit for each of orbital solution in the database. By propagating in time all these swarms to the previous or next perihelion, we can estimate the uncertainties for all presented orbital parameters. For those who intend to perform similar investigations, but for example on much longer time scales, we offer downloading a text file consisting of all 5001 VCs at the stage of original or future orbits (see the appropriate screens with  original  or  future  orbit). 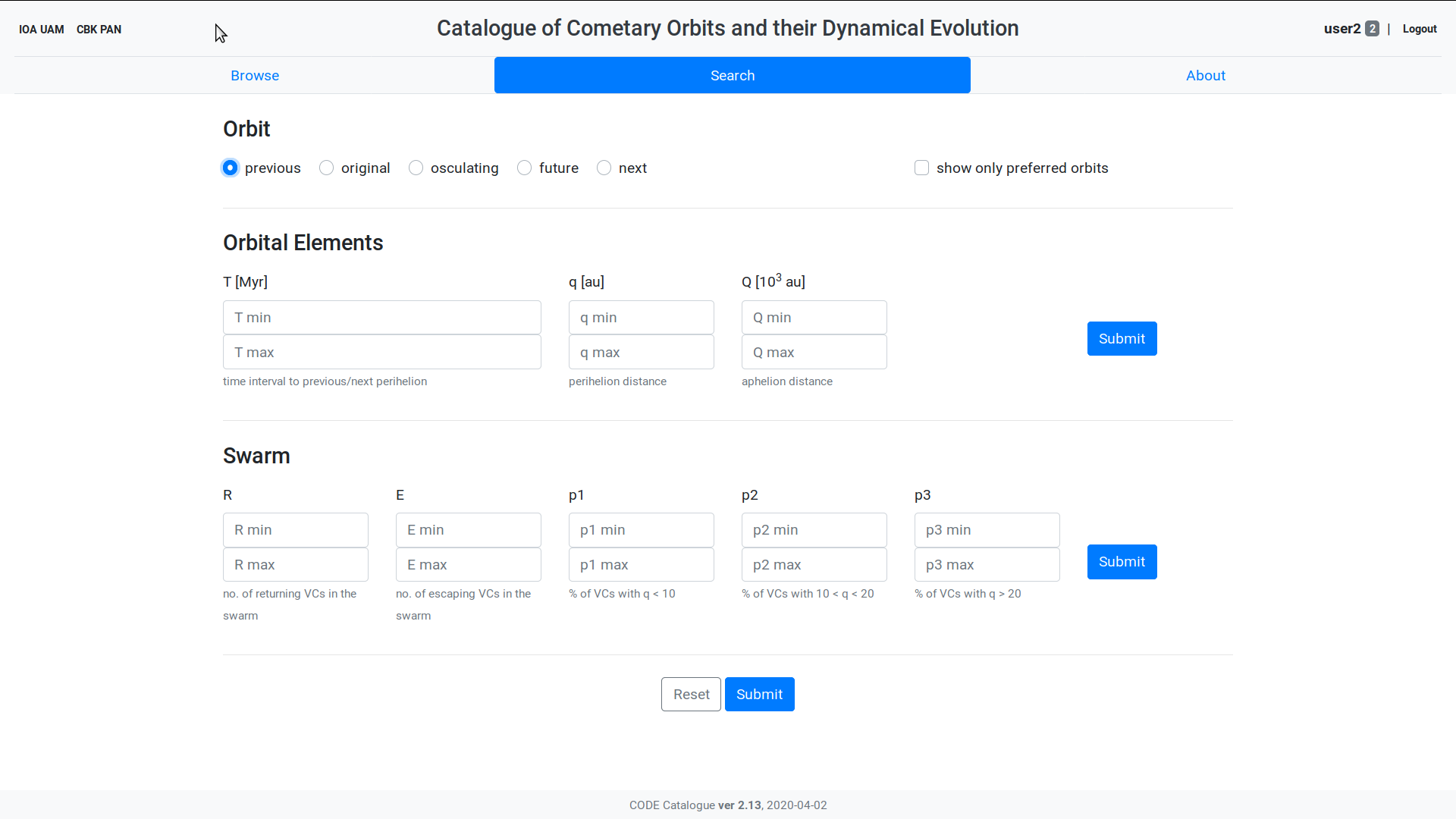 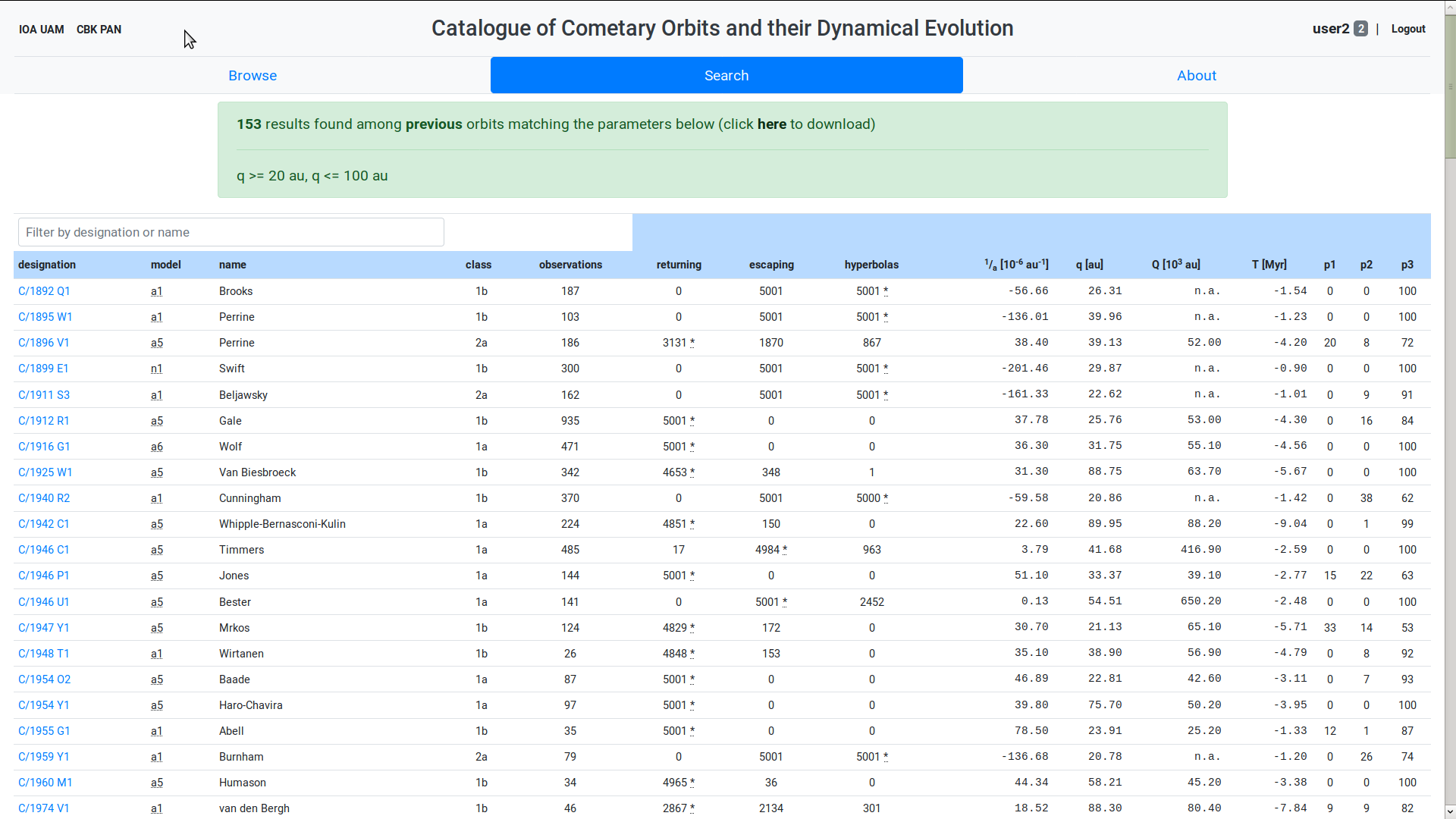 After entering the  Search  view the user is offered with a possibility of choosing a subset of orbital solutions available in CODE by narrowing intervals of almost all parameters. By default, the  Search  screen starts searches among osculating orbits but it can be switched to the other four types (see left picture just above – an example of searching perihelion distances from 20 au to 100 au among previous orbits). By checking an appropriate box, one can limit the search to the preferred orbits only.

Orbital elements are selected by defining an interval of interest and a simple check of correctness of the entered data is performed dynamically. A special treatment is performed of four elements: a perihelion and aphelion distance, an eccentricity and a semimajor axis. Since these elements are not independent the user might enter the preferred interval of any two of them and the rest is automatically blocked. In the lower part of the screen a selection basing on the observational characteristics or an orbital solution type can be preformed.

Searching among  'previous'  and  'next'  orbits is performed with a little different form, closely adapted to the information presented for these types of orbits (see the right picture as a result of searching descibed in the left picture).

After clicking the  Submit  button the user obtains a list of matching orbital solutions in a form identical with the  Browse  screen (which futhermore can be filtered by a comet designation or name). There is only one important difference: the search results can be downloaded as a simple text file, with all the data presented in a full precision, and including their uncertainties.

At the moment, the CODE public Internet interface operates at the Astronomical Observatory Institute, Faculty of Physics, A.Mickiewicz University. A mirror site at the Space Research Centre of Polish Academy of Sciences is under development.

This research was partially supported by the project 2015/17/B/ST9/01790 founded by the National Science Centre in Poland. This research has made use of cometary positional data provided by the International Astronomical Union's Minor Planet Center.