C/2003 WT42 LINEAR
more info
Comet C/2003 WT42 was discovered on 19 November 2003 by LINEAR as an apparently asteroidal object; observations raported in mid-January 2004 [IAUC 8270, 2004 January 16] demostrated the cometary appearance. Three images of this object were found on LINEAR exposures taken on 30 October 2003. Comet passed perihelion in April 2006.
C/2003 WT42 was observed 4.6 yr during five oppositions in a range of heliocentric distances: 8.26 au – 5.191 au (perihelion) – 7.66 au.
Comet had its closest approach to the Earth on 3 February 2006 (4.403 au, about two months before perihelion).
Pure gravitational solution given here reveals some trends in (O-C) where most prominent are in the last opposition (see lower panel in the figure). It seems that there are any certain NG effects detectable on the basis of positional data. Therefore two other solutions are also given (based on pre-perihelion data and preffered for past dynamical calculatins and post-perihelion data dedicated for the future dynamical evolution).
Solution obtained by Syuichi Nakano [ Nakano Notes 1636] also gives trends in (O-C) in the last opposition; however, many of observations taken in this opposition are discarded, for example all data (14 measurements) after 2008 March 31. His solution is based on 2382 observations (arc: 2003 October 30 to 2008 March 31; rms = 0.60 arcsec) and gives 1/aorigin = +0.000029, 1/afuture = +0.000183).
Solution based on first three oppositions also gives very similar original 1/a to this obtained on the basis of the complete data set (1/aorigin = +0.00047).
This Oort spike comet suffers a minor planetary perturbations during its passage through the planetary system that lead to a more tight future orbit (see future barycentric orbit). 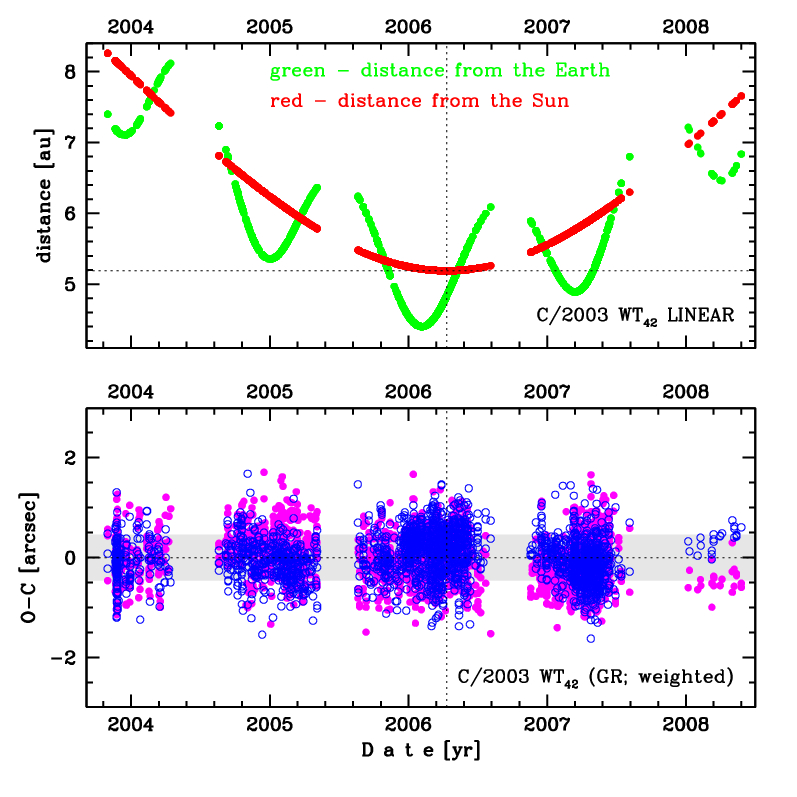