C/1948 E1 Pajdusakova-Mrkos
more info
Comet C/1948 E1 was discovered on 13 March 1948 by Ľudmila Pajdušáková and Antonín Mrkos, at Skalnaté Pleso Observatory, Slovakia. Prediscovery images were found by George van Biesbroeck on plates exposed on 15 February and 5 March at Yerkes Observatory (Wisconsin, USA). At the moment of discovery, the comet was two months before perihelion passage, and it was last seen on 9 February 1950. [Kronk, Cometography: Volume 4].
This comet made its closest approach to the Earth on 24 April 1948 (1.860 au), that is about three weeks before perihelion passage.
Solution given here is based on data spanning over 1.912 yr in a range of heliocentric distances from 2.240 au through perihelion (2.107 au) to 6.646 au.
This Oort spike comet suffers almost negligible planetary perturbations during its passage through the planetary system, and it will enter the planet zone as Oort spike comet in the next perihelion passage (see future barycentric orbit).
More details in Królikowska et al. 2014. 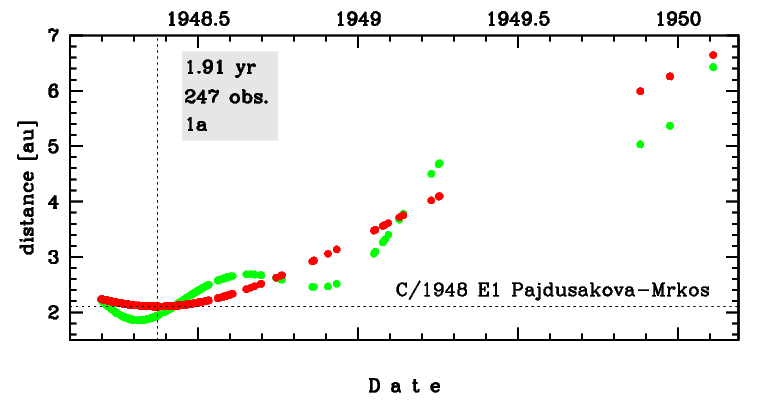