C/1944 K2 van Gent
more info
Comet C/1944 K2 was discovered on 23 May 1944 by Hendrik van Gent (Union Observatory, Johannesburg, South Africa). Soon, the prediscovery image from 15 May was found by van Gent. At the moment of discovery, the comet was about two months before perihelion passage, and it was last seen on 11 August 1945. [Kronk, Cometography: Volume 4].
This comet made its closest approach to the Earth on 20 May 1944 (1.913 au), that is three days before its discovery.
Solution given here is based on data spanning over 1.19 yr in a range of heliocentric distances from 2.288 au through perihelion (2.226 au) to 4.664 au.
This Oort spike comet suffers moderate planetary perturbations during its passage through the planetary system that lead to escape the comet from the solar systemon a hyperbolic orbit (see future barycentric orbits).
More details in Królikowska et al. 2014. 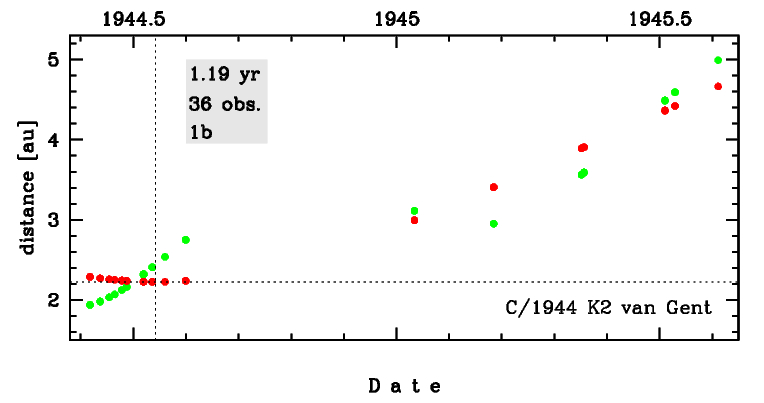