C/1921 E1 Reid
more info
Comet C/1921 E1 was discovered on 14 March 1921 by William Reid (Cape Town, South Africa), that is almost two months before its perihelion passage, and the comet was last seen on 26 November 1921 [Kronk, Cometography: Volume 3].
This comet made its closest approach to the Earth on 29 April 1921 (0.628 au), that is 1.5 month after its discovery, and 11 days before perihelion passage.
Solutions given here are based on data spanning over 0.701 yr in a range of heliocentric distances from 1.376 au through perihelion (1.008 au) to 3.075 au.
Pure gravitational orbit determined from all available positional measurements (568 observations) give 2a-class orbit similarly as in Minor Planet Center (146 obs. used, the same arc of data; 2A-class, see MPC).However, using the purely gravitational model of motion the original barycentric orbit is hyperbolic, whereas GR orbit obtained by Marsden (1978) using only 26% of data gave original elliptical orbit (Marsden, Sekanina and Everhart 1978, see also MPC).
It was possible to determine the non-gravitational orbit for C/1921 E1 (preffered orbit); the decrease of RMS is insignificant, however, the trend in O-C giving negative residuals in all RA and DEC measurements (for pure GR model of motion) at the end of the data interval (October and November) is cancelled.The derived NG solution give elliptical orbit with original barycentric 1/a inside the Oort spike (orbit of 2b-class, see NG solution).
This Oort spike comet suffers rather small planetary perturbations during its passage through the planetary system; however, they led to escape the comet from the planetary zone on a hyperbolic orbit (see future barycentric orbits).
More details in Królikowska et al. 2014. 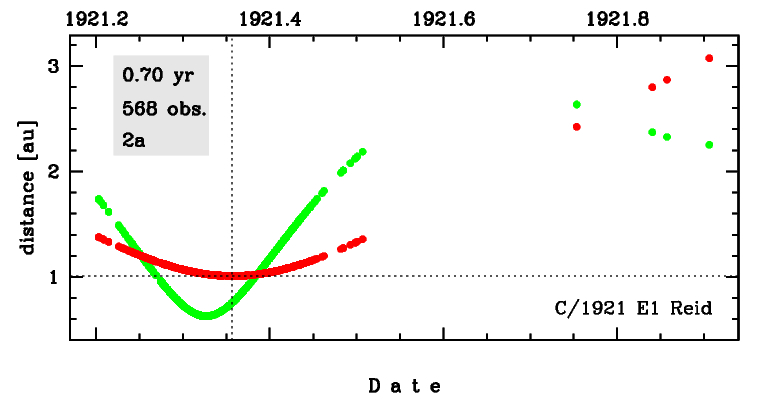