C/1906 E1 Kopff
more info
Comet C/1906 E1 was discovered on 4 March 1906, 4.5 months after perihelion passage, and was last seen on 4 July 1907 [Kronk, Cometography: Volume 3].Soon, the comet was found on two photographic plates exposed on 15 January 1905 and 10 January 1904 in Königstuhl Observatory (Heidelberg).
This comet made its closest approach to the Earth on 2 March 1906 (2.60 au), that is two days before its discovery.
E.E. Barnard (Yerkes Observatory) observed secondary faint component (3-4 magnitudes fainter than the principal nucleus) between the period of 1906 March 17 – 1906 March 31 (AJ 1908, Vol. 25, 83). At that time, the comet was at a distance of about 3.6 au from the Sun and 2.6 au from the Earth and just five months after perihelion passage.
Two solutions given here are based on data spanning over 3.48 yr in a range of heliocentric distances from 6.53 au through perihelion (3.34 au) to 6.38 au; however the preferred orbit is based on shorter arc of 2.18 yr including data only before the detection of secondary component.
This Oort spike comet suffers moderate planetary perturbations during its passage through the planetary system that lead to escape the comet from the solar system on a hyperbolic orbit (see future barycentric orbit).

C/1906 E1 is included to the list of split comets for unknown reasons in Comets II. 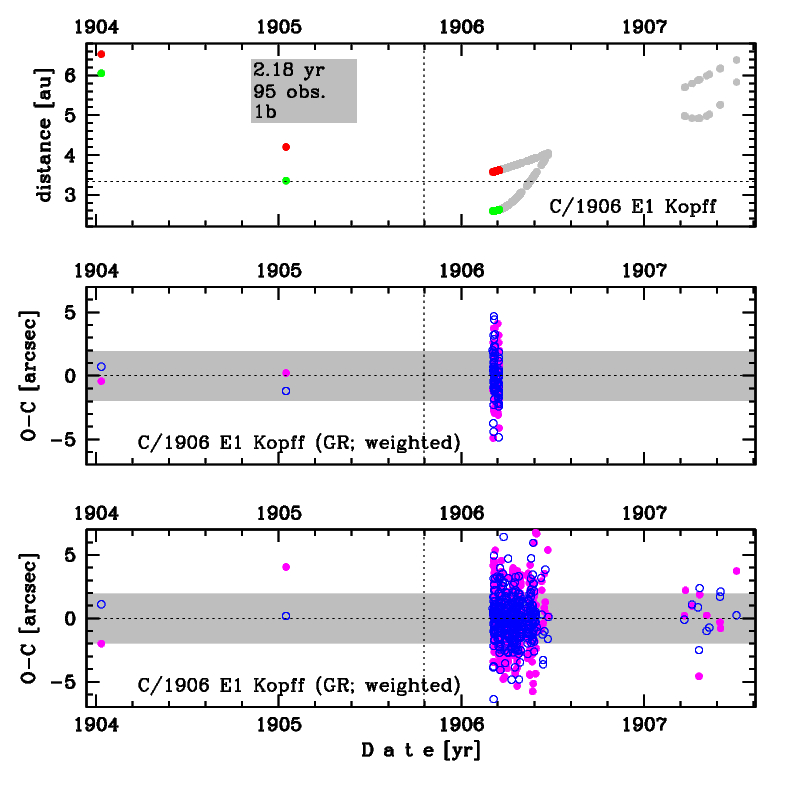