C/2007 W1 Boattini
more info
Comet C/2007 W1 was discovered on 20 November 2007 by Andrea Boattini (Mt. Lemmon Survey), that is about seven months before perihelion passage. It was observed until 17 December 2008.
Comet had its closest approach to the Earth on 12 June 2008 (0.210 au), less than 2 weeks before its perihelion passage.
C/2007 W1 is a comet with non-gravitational effects strongly manifested in positional data fitting. For this comet, a considerable decrease in RMS for the symmetric non-gravitationalsolution compared with purely gravitational solution was observed, as well as a clear improvement in the amplitude of tendencies in right ascension and declination (compare nn with a5 solutions). A further substantial decrease in RMS occurs when an asymmetrical NG model is used to determine the orbit (n6). This last solution was recomended here as preferred global orbital solution; this solution is based on data spanning over 1.07 yr in a range of heliocentric distances: 3.33 au – 0.850 au (perihelion) – 2.84 au. However, for backward and forward dynamical evolution two separate orbital solutions are given: NG orbit for pre-perihelion arc of data dedicated for past orbital evolution, whereas NG orbit based on post-perihelion data is dedicated for future evolution. The NG parameters for both these NG solutions reveal that on average, the magnitude of NG acceleration obtained using positional data seems to be considerably greater after perihelion than before perihelion. A similar approach was applied earlier by Nakano for C/2007 W1; see Nakano Notes 1731Band Nakano Notes 1731A.
C/2007 W1 having a negative value of (1/a)ori for all types of solutions is an candidate to be an interstellar comet and suffers moderate planetary perturbations during its passage through the planetary system and these perturbations lead to a more tight future orbit (see future barycentric orbits).
See also Królikowska and Dybczyński 2013 and Królikowska 2020. 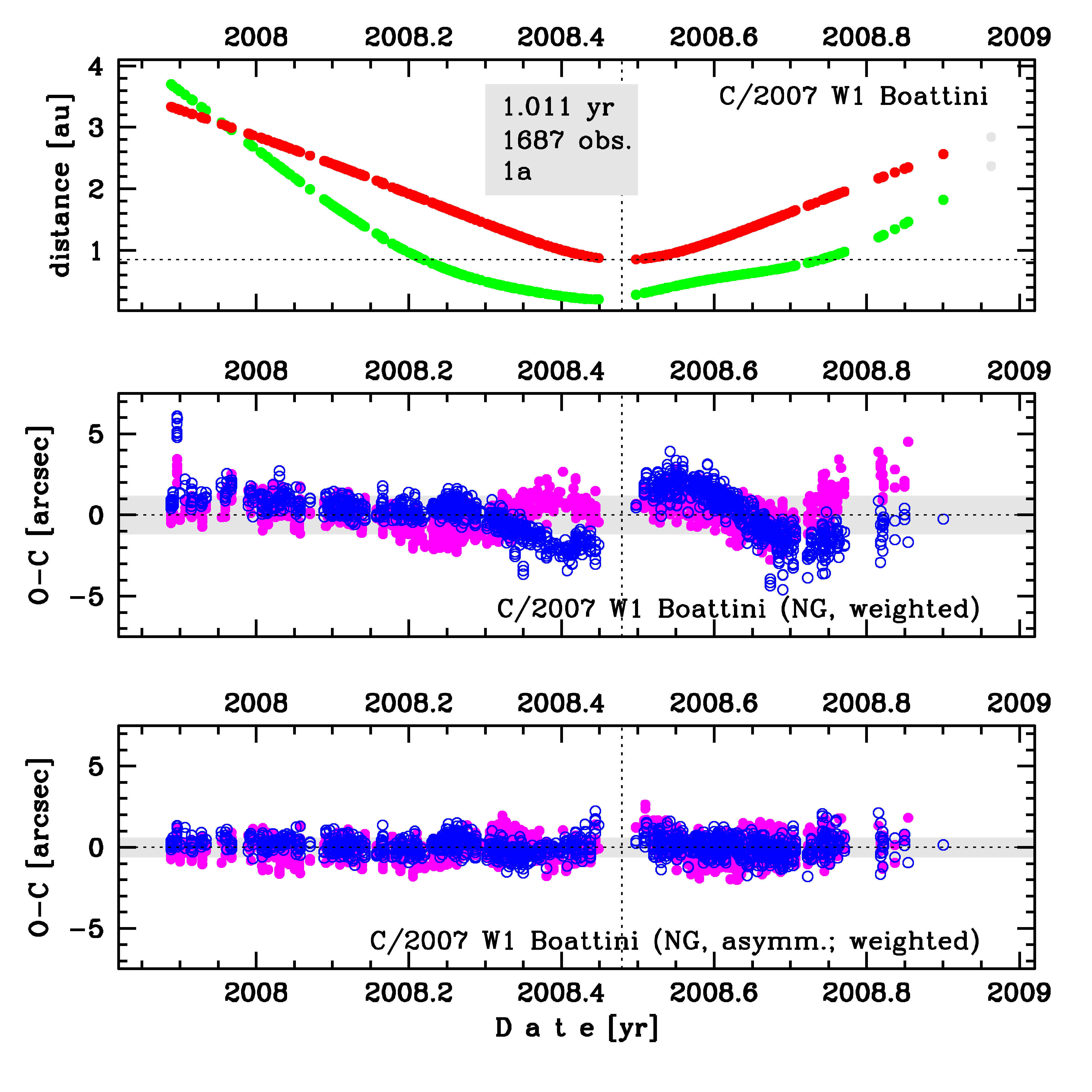